by admin
in Around the world, History, World
3 min read
0 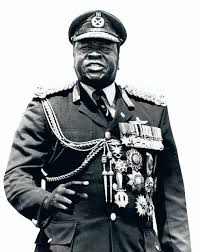 In 1971, General Idi Amin overthrew the elected government of Milton Obote and declared himself president of Uganda, launching a ruthless eight-year regime in which an estimated 300,000 civilians were massacred. His expulsion of all Indian and Pakistani citizens in 1972—along with increasing military expenditures—brought about the country’s economic decline, the impact of which lasted decades. In 1979 his reign of terror came to an end as Ugandan exiles and Tanzanians took control of the capital of Kampala, forcing Amin to flee. Never brought to justice for his heinous crimes, Amin lived out the remainder of his life in Saudi Arabia.

Idi Amin Dada was born c. 1925 in Koboko, in northwestern Uganda, to a Kakwa father and Lugbara mother, who separated shortly afterwards. In 1946, after receiving only a rudimentary education, Amin joined the King’s African Rifles (KAR), a regiment of the British colonial army, and quickly rose through the ranks. He was deployed to Somalia in 1949 to fight the Shifta rebels and later fought with the British during the suppression of the Mau Mau Rebellion in Kenya (1952-56). In 1959 he attained the rank of effendi—the highest position for a black African soldier within the KAR—and, by 1966, he had been appointed commander of the armed forces.

After more than 70 years under British rule, Uganda gained its independence on October 9, 1962, and Milton Obote became the nation’s first prime minister. By 1964, Obote had forged an alliance with Amin, who helped expand the size and power of the Ugandan Army. In February 1966, following accusations that the pair was responsible for smuggling gold and ivory from Congo that were subsequently traded for arms, Obote suspended the constitution and proclaimed himself executive president. Shortly thereafter, Obote sent Amin to dethrone King Mutesa II, also known as “King Freddie,” who ruled the powerful kingdom of Buganda in south-central Uganda.

A few years and two failed—but unidentified—assassination attempts later, Obote began to question Amin’s loyalty and ordered his arrest while en route to Singapore for a Commonwealth Heads of Government Conference. During his absence, Amin took the offensive and staged a coup on January 25, 1971, seizing control of the government and forcing Obote into exile.

Once in power, Amin began mass executions upon the Acholi and Lango, Christian tribes that had been loyal to Obote and therefore perceived as a threat. He also began terrorizing the general public through the various internal security forces he organized, such as the State Research Bureau (SRB) and Public Safety Unity (PSU), whose main purpose was to eliminate those who opposed his regime.

In 1972, Amin expelled Uganda’s Asian population, which numbered between 50,000 and 70,000, resulting in a collapse of the economy as manufacturing, agriculture and commerce came to a screeching halt without the appropriate resources to support them.

When the Popular Front for the Liberation of Palestine (PFLP) hijacked an Air France flight from Israel to Paris on June 27, 1976, Idi Amin welcomed the terrorists and supplied them with troops and weapons, but was humiliated when Israeli commandos subsequently rescued the hostages in a surprise raid on the Entebbe airport. In the aftermath, Amin ordered the execution of several airport personnel, hundreds of Kenyans whom were believed to have conspired with Israel and an elderly British hostage who had previously been escorted to a nearby hospital.

Throughout his oppressive rule, Amin was estimated to have been responsible for the deaths of roughly 300,000 civilians.

Over time, the number of Amin’s intimate allies dwindled and formerly loyal troops began to mutiny. When some fled across the border into Tanzania, Amin accused Tanzanian President Julius Nyerere of instigating the unrest and retaliated by annexing the Kagera Salient, a strip of territory north of the Kagera River, in November 1978. Two weeks later, Nyerere mobilized a counter-offensive to recapture the land, and drove the Ugandan Army out with the help of Ugandan exiles. The battle raged into Uganda, and on April 11, 1979, Amin was forced to flee when Kampala was captured. Although he originally sought refuge in Libya, he later moved to Saudi Arabia, where he lived comfortably until his death of multiple organ failure in 2003.

JOSEF MENGELE: Known as The Agent Of Death Also the Evil Doctor. Biography, facts and Death

REINHARD HEYDRICH: The Monster who Adolf Hitler described as “the man with the iron heart”

OTA BENGA: The Tragic life of An African who was kept In Zoo

REINHARD HEYDRICH: The Monster who Adolf Hitler described as "the man with the iron heart"